The perfect gift for RVers!

We received a call from a customer last month with an interesting idea.  He wanted to build a hand-held site survey tool to check for clear satellite shots in heavily treed areas.  The idea peaked our interest and this is what we suggested he use - -  A piece of 3/4" wood stock, approximately 5" X 9" in size.  Draw a line down the center of the 9" length.  Use a 2 3/8" hole saw to drill two holes in the wood stock as shown in the first photo.  Sand all the edges and the insides of the two holes to get a smooth fit of the compass and scope tools used with your tripod. 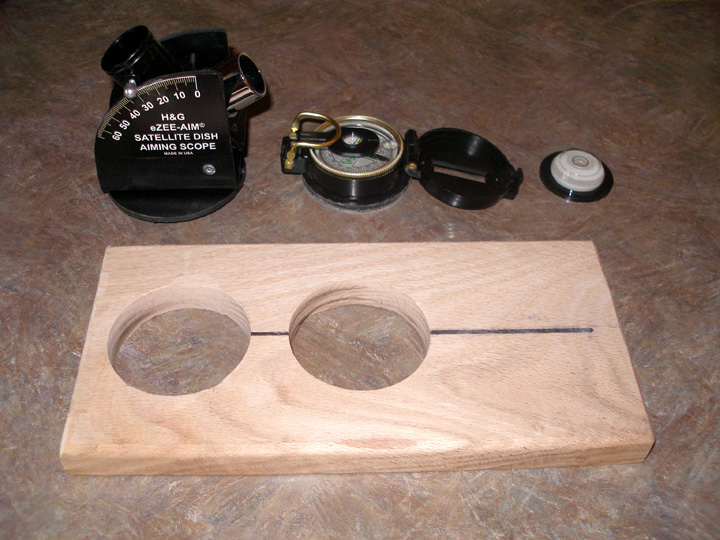 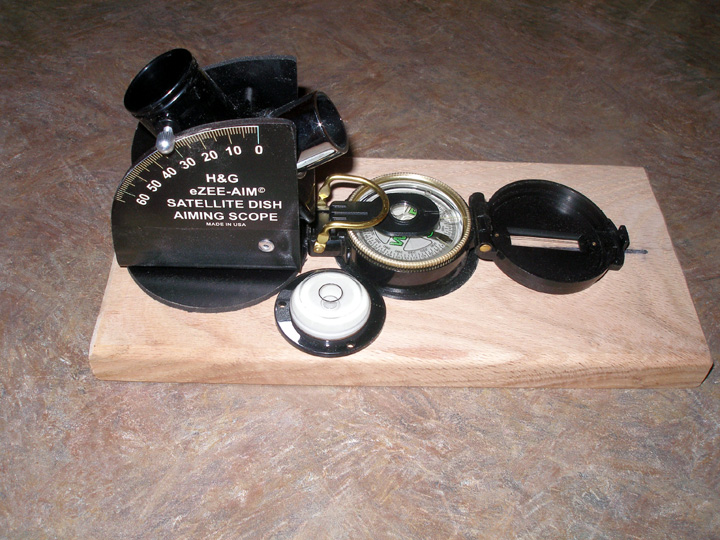 Position the tool so the compass is at the correct azimuth.  Check for level and look into the scope to check for a clear line of site.  If keeping the tool level proves difficult, consider setting it onto a pole to steady it during the aiming process.  To check for multiple satellites, simply adjust the azimuth setting the necessary degrees for the additional satellites and re-check for clear site.

Last month you showed a board a viewer sent in that he made that you can put the dish aiming scope and the compass on along with the level. Well I built this same board just a little longer for a trip we just came back from. This was just a God sent for us, I was around a lot of trees so I used this and I saved myself a lot of time and energy by using this. I found a clear shot in minutes that I probably would have given up using the tri-pod to find an opening. It was a very small one but as I said I found in minutes. You should think about selling this as I know there are a lot of people who could really use this to save time. Just a suggestion

Last month, we let you know about product evaluation articles on our products that were published in the March issue of Motor Home Magazine and the April issue of Trailer Life.  Both articles were written by Bill and Jenn Gehr, who frequently submit articles to these magazines.  Bill and Jenn have kept in touch with us since the articles were published and recently called to let us know that while they were camped in Utah their tripod and dish were tested during a storm that packed winds of 70 MPH.  The tripod stood up well and had no damage.  Bill mentioned that he had it anchored using the 12" stake method we suggest for high wind applications.

For those who may have missed this suggestion in previous newsletters, we repeat it here -

The 12" SPIKE ANCHOR.  This anchor consists of two 12" galvanized spikes, easily obtainable at Home Depot for about $2.00.  Drive one spike into the ground at a 45 degree angle, leaving about 2" above ground.  Place the ring of the ground screw stake over the spike.  Insert the second spike into the ring at an opposing 45%uFFFD angle and pound into the ground like the first spike.  This will provide a very firm anchor,  much like THE CLAW, which is another anchor device from a different manufacturer.